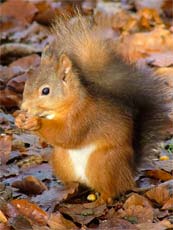 In the 19th century a small number of American grey squirrels were introduced to Britain and it is well known that they are now pushing the native red squirrel to extinction – a human induced ecological disaster.

In recent years it was discovered that the greys carry the squirrelpox virus which doesn’t harm them but induces a horrible lingering death in nearly all red squirrels that become infected.  Until 2012 it was believed that the disease was confined to mainland UK, but last year it was discovered also in Ireland.

The Wildlife Ark Trust is a small UK charity raising funds to sponsor research into the development of a squirrelpox vaccine to protect reds against the disease.

An effective vaccine candidate has now been discovered but it needs to be developed and the charity is raising money towards the next phase of research costing £198,000.