The Foundation has awarded a grant to the Wild Peace Alliance Wolf OR-7 Expedition due to take place in May – July 2014.

A 42-day trek through 1200 miles of the wildlands and mountains of Oregon and California, following the tracks of the lone wolf OR-7, the first wolf living in California since the last was killed 90 years ago. This expedition aims to encourage further collaboration and tolerance of wolves in North America, to raise awareness, and to unlock further funding to develop and deliver a collection of educational products to address human-wildlife conflict in the Pacific Northwest of the USA.

The two-and-a-half-year-old grey wolf’s arrival in December 2011 prompted news articles, attracted feverish fans, and sent wildlife officials scrambling to prepare for a new and unfamiliar predator.  The wolf, known to biologists as OR7, owes his fame to the GPS collar around his neck, which has allowed scientists and fans alike to use maps to follow his 1,200-mile trek south from his birthplace in NE Oregon.  Along the way, OR7 has attracted an almost cult status.

By foot and mountain bike, the expedition team of 5 will travel from northeast Oregon into northern California following the GPS track of Wolf OR-7 to raise awareness, educate and connect with communities.  The Expedition will produce a film; educational pack (card game, map, and E-book); public storytelling, presentations, and educational events; multimedia articles, and social media awareness-raising. 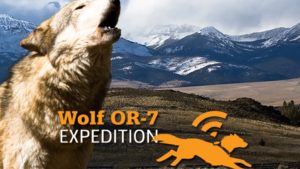