Ed Stafford has walked the length of the Amazon River in South America from the source to the sea. It took two and a half years and no-one had ever done this before. The Foundation made a grant to help provide food for Ed’s walking companion.

The whirlwind of media attention when I came home was especially overwhelming after having been so isolated for so long. Living predominantly in the rainforest for two and a half years can’t help but slightly change your outlook on life. It’s certainly very easy to see how locals view the Amazon as a limitless resource. On the ground the rainforest stretches infinitely and people have been brought up in a world where they take from the jungle and don’t give it a second thought. I myself found my sad and shocked reaction to the death of animals lessening as the expedition wore on. Horrified at the brutal death of a tortoise in mid 2008 and then in late 2009 having to kill two myself in order to have food to live. It made me realise that life in the jungle has to go on, people have to live and natural predators are part of the eco-system. The Amazon’s problems don’t lie at this grass roots level.

On a wider scale I was both horrified and heartened by the state of modern Brazil. Horrified because after hearing how Brazil claimed to be doing everything it could to slow down deforestation I never saw any enforcement of logging restrictions in my entire time there. Logging was being conducted at a criminally unsustainable rate completely ungoverned by any overseeing bodies. IBAMA, or the agencies that it has now become, were never anywhere to be seen.

Conversely that does not represent the attitude of the people as a whole and especially the children I met. The “lungs of the planet” comment was often mentioned to me and it seems as though the next generation are proud of their resource and passionate about conserving it. The optimistic side of me sees a future where this generation will move up into positions of power and it will be unacceptable to carry out non-sustainable extraction practices from the rainforest.

The fear I once had, that possibly spurred me into doing this challenge, has now gone completely. Cho, my Peruvian assistant, and I have never been more relaxed than when we were miles from anywhere having just set up our hammocks between two trees, the coffee is bubbling over the fire and we are heading down to the stream for a wash. The fear was of course the natural one everybody has of the unknown but at the end of 860 days Cho and I felt like the Amazon was our home. We found our time in cities and towns far more stressful.

I often think that the fear that locals often have of the rainforest is again based on myths and lies. If people spent a bit of time working in the forest they would realise that it is a safe and wonderful place and they may then be less inclined to sanitize and clear it.

On the whole I therefore have far less negative feeling to locals who are making a living from their surrounding area, even if they contribute to damaging the forest, than I do for the powerful Governors in the Brazilian Amazonian states who clearly have many tie-ins with cattle ranching and other businesses that exacerbate deforestation on a huge scale.

The walk has given me an incredible insight into how the Amazon really works. How people really feel and what is really going on. It was impossible not to fall in love with the area as a whole and I will always do whatever I can to help educate people about how special yet fragile the area is. Just 12 days out of it, the one thing I miss the most is the feeling of being truly remote yet fully in control and living comfortably in the greatest forest in the world.

One of the hardest things of all expeditions is convincing people that it is worthwhile and to attract financial backing. At a time when the economy was at its lowest our main sponsors had to stop their monthly payments leaving us in somewhat of a predicament in the middle of the Amazon, miles from anywhere, with no funding.

We couldn’t give up and so we searched hard for understanding organisations who might be able to help. Sculpt the Future were part of a small group of organisations that came good just when we needed them most. When the cynics were writing us off, Sculpt the Future stepped in and had the generosity and vision to back the expedition and help it back onto its feet again.

I am indebted to everyone at Sculpt the Future for this assistance. Cho and I used to have little celebrations in the jungle when even small donations came in. Sculpt the Future’s donation was substantial and made a real difference to whether the expedition would be completed or not.

Thanks to everyone involved from Cho and myself. We wish you all the best and hope if we can be of assistance in the future that you will call on a return favour. 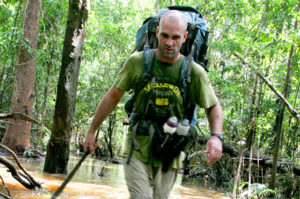 Update 1:   In 2011 Guinness World Records formally recognised Ed’s achievement and he appears in the 2012 Guinness Book of Records.

Update 2:  Ed undertook another adventure for the Discovery Channel and spent 60 days, naked and marooned on a desert island.  Click the link for more information: