Oceans Initiative is a team of scientists headed by Dr Rob Williams, Marie Curie Research Fellow (University of St Andrews, Scotland, 2010-2012), working to protect wildlife – whales, dolphins, sharks, salmon, and seabirds, in Canada, the US and around the world.

Freshwater cetaceans are among the world’s most critically endangered mammals. They inhabit complex habitats in densely populated human environments, making them difficult to survey and promoting conflict between wildlife conservation and humans.

A grant was awarded to complete a project started in 2002, where the archived data recently have become incredibly valuable.  In the last decade, Amazon River dolphins in some countries are now hunted so their carcasses can be used as bait to catch catfish with the result that Amazon River dolphins that were once common enough to be used to refine methods to study endangered Asian river dolphins, may now be in danger themselves.

Dr Williams’s colleagues at Fundacion Omacha (Columbia) have done some extraordinary work in environmental education, working with fishermen on alternative prey, and development of ecotourism as a non-lethal, sustainable use of river dolphins.  Surveys of these species have been conducted on the Amazon and Orinoco rivers, but they require non-standard analysis methods, and method development lags behind data gathering. The project output is an abundance estimate which will be reported and widely disseminated for research purposes, and also the production of simple-to-use, practical advice about how partners in the Amazon and Asia can better monitor the health of river dolphin populations themselves. The grant will therefore result in the development of a monitoring toolkit to evaluate trends in river dolphin populations – a toolkit that can be transported for use in other parts of the Amazon basin.

This toolkit will provide scientifically robust guidance to evaluate the impacts of fishery mortality on dolphins, and to guide the development of a sustainable dolphin-watching ecotourism business in the region.

Update:  The project resulted in a fully-funded Ph.D. studentship for a Brazilian student to come to St Andrews University for 2 or 3 years to train with statisticians to develop better methods to study and protect river dolphins and make Brazillian students self-sufficient in the conduct and analysis of surveys of these species.  This additional result enabled the project to leverage an approximate 10-fold return on the Foundation’s original seed funding for this river dolphin project. 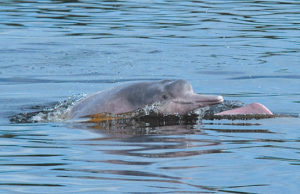