Creativity for Change – Indian Ocean Row – from Australia to Mauritius

Support was provided to help enable British adventurer, Roz Savage, row solo across the Indian Ocean in a bid to be the first woman to cross all 3 oceans – Pacific, Atlantic, and Indian – on her own.  Roz’s voyages are projects of the Blue Frontier Campaign, a US registered charity.  Roz left Perth, Western Australia on April 12th, 2011, and arrived in Mauritius on the 4th of October 2011.

Roz Savage is a United Nations Climate Hero, a trained presenter for the Climate Reality Project, and an Athlete Ambassador for 350.org.  She is on the board of Adventurers and Scientists for Conservation and a Blue Ambassador for the UK-based BLUE Project.  She promotes plastic-free communities as co-patron of the Greener Upon Thames campaign for a plastic bag-free Olympics in 2012, and as a Notable Coalition Member of the Plastic Pollution Coalition. She also supports the work of the 5 Gyres Institute and is an Ambassador for Plastic Oceans.

“My ocean rows are a perfect metaphor for how we as individuals have the power to make a difference. The journey across the Atlantic took me about a million oarstrokes . I could have stood at the start line and despaired, thinking that one oarstroke could make no difference. But if you put enough small actions together, you can achieve almost anything. Every time we choose what to buy, or how to get from A to B, we are casting a vote for the kind of future we want.” 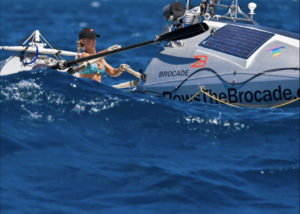