A donation has been provided to support Voice of Nature (VoNAT) – a Cameroon community based biodiversity conservation and sustainable development non-profit organisation – to initiate a project to educate young people on the conservation of the Goliath Frog.

The world’s biggest frog, Goliath Frog (Conraua goliath) are found only in the tropical rainforest of Central Africa, within the South Western part of Cameroon and north of Equatorial New Guinea.  Scientists believe it is has been on Earth for 250 million years but is on the brink of extinction and is classified as an ‘endangered species’ by International Union for the Conservation of Nature IUCN and as a protected species of Class A according to wildlife law in Cameroon.  It is hunted for food and for the pet trade and is losing its habitat and and numbers have halved over the past 15 years.

Mount Nlonako in Cameroon is ranked among the Top 10 mountain ecosystem diversity hotspots in central Africa but but lack of employment lead local people, including children, to seek increasingly more effective means of increasing their catch.  Love and respect for the species has eroded with a more westernised life and the situation is very bleak.

The project seeks to educate 50 young people (aged 10-25) on the environmental consequences of their actions and to boost their appetite in the conservation of endangered amphibian species through storytelling – to turn die-hard hunters into dedicated conservationists.  Indigenous and local grassroots leaders with local knowledge will counter the indifference of these young people through intensive experiential learning in a natural setting where they will gain local knowledge on biodiversity conservation, especially endangered frogs, through folktales.  They will be guided to identify and gather information about key amphibious hotspots, conservation threats, feeding signs, behavioural patterns using different communication tools.  They will be trained to use the information gathered to create stories to be posted on their social media accounts and published in a magazine to be distributed to schools and environmental non-profit organisations and used for conservation education. 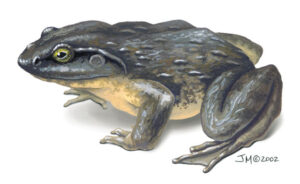