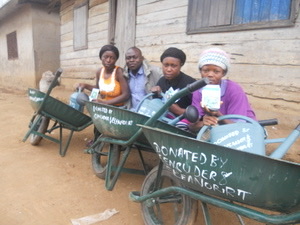 A grant has been made to Centre for Community Development and Environmental Restoration (CENCUDER) in Cameroon, towards a project o promote community wildlife conservation and regenerative agriculture around the Bakossi National Park.

CENCUDER was founded in 2008 as an officially registered NGO in the Cameroon to undertake sustainable agricultural activities to protect the forest and natural resources; school and community projects; and provide access to clean and affordable energy.

The applicant’s conservation targets is concentrated around two villages bordering the Bakossi National park and found within the Mbwogmut Clan in the Bangem sub division.  The project’s aim is to strengthen the conservation of the declining wildlife populations in the Bakossi National Park by raising awareness on the rights of animals, and maintaining the beauty of the ecosystem in the protected area.

It is a region mainly inhabited by the Bakossi people and in the last few decades, there has been rapid growth in the human population – all small farmers – adding pressure on the need for expansion of farmlands. The indigenous people practice logging, with the wood used for construction of homes and for making furniture and harvest forest plants and this impacts the rainforest – particularly bird and bat habitats. The local population cultivate cocoa and coffee as their main cash crops and grow plantain, also growing cocoyam, cassava, beans, maize and pepper for their own consumption and for sale to increase household income. Most people hunt for bush meat, which is an important source of protein and also for sale. A 2003 report from the ministry of wildlife and nature protection said this activity had reached unsustainable levels and was putting the existence of large mammals especially the great apes at risk.

The project will promote Inga alley cropping – the planting of agricultural crops between rows of Inga trees.  This system is an alternative to traditional slash and burn cultivation and the technique has been found to increase yields.  The project will undertake two sensitisation and capacity building workshops targeted at approximately 100 farmers from the two villages bordering the Bakossi National Park.

As part of the project, tools will be purchased and distributed to enable the establishment and management of two giant nurseries with a capacity of 3,000 improved cocoa seeds and nitrogen fixing trees each when the nurseries are mature, which very often is typically between 4-6months.

The theoretical knowledge gained during the workshop will be put into practice as, after the workshops, CENCUDER will donate the farming tools to the farmers so that they can use them to establish nurseries, manage manage them and transplant when the nurseries are matured.

The seedlings will be shared among individual farmers for upward transplanting to their farms. CENCUDER’s technician will continue to follow up with the farmers on how the trees are transplanted and growing. Generally Inga has fast growth and matures within a year and half while cocoa will start producing in 3 years.

The grant will support the workshops and the purchase of tools.