10:10 is committed to inspire and enable huge numbers of individuals and organisations to make ambitious carbon cuts – starting with 10% in a year.  By publicising achievements, it seeks to raise awareness the climate change can be solved.

10:10’s ‘Lighter Later’ Campaign aims to shift the UK clocks by one hour to save carbon, save lives and create jobs.  It asserts that, by not changing the clocks in autumn, we could:

The campaign was very successful and built a coalition of more than 89 national organisations and a Private Member’s Bill on clock change, which passed the second reading in Parliament.  A small grant was awarded to focus the campaign on issues in Scotland.

By January 2012 the campaign had received widespread cross-party backing for the Daylight Saving Bill, with more than 150 MPs attending to vote in favour at the third reading, but it failed due to lack of time. Due to this, 10:10 returned the donation as it had not used the funding yet in Scotland.

10:10 will continue to campaign on this issue and keep the 40,000 people engaged in and supportive of its Lighter Later Campaign. 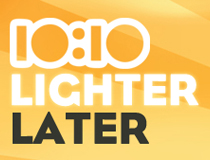